The contractors have now completed the first two of their 22 week programme. The greenhouse already looks very different. Four steps have been carried out.

Findings: We were all struck by how slender and graceful the vertical glazing bars are when fully exposed. Despite being nearly 200 years old, they are in very good condition. That said with the glass removed they wobble- it is the glass that puts the building under tension – and on the (weaker) east gable the verticals are now braced.

Findings: As we knew, it is these joints that have suffered the greatest corrosion from internal condensation. 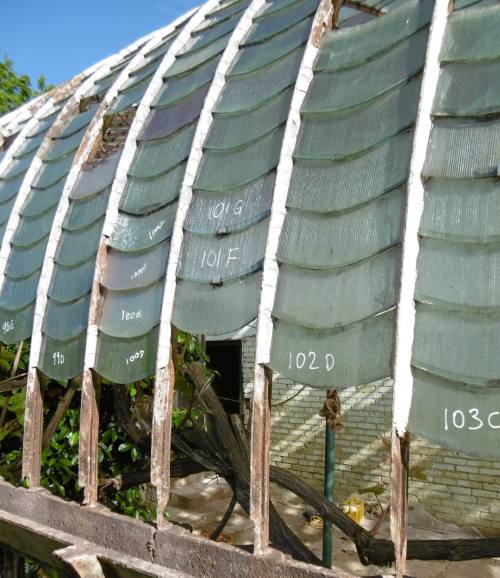 Approximately 25% of the bars will be cut away at the bottom and a new piece of identical pattern welded in. In some cases it may be necessary to go further, dig out the lead fastening and then re-lead the new foot. As this requires heat, it is quite an undertaking and will only be done where essential.

Findings: We suspected that the west side of the greenhouse was built some time after the east side. However once we come to look closely at the prefabricated components such as casement frames and stays, all sorts of tiny design differences emerge between the two halves. These we shall be noting as we go along.